"Were she better or you sicker, then the stars would not be so terribly crossed, but it is the nature of stars to cross, and never was Shakespeare more wrong than when he has Cassius note, 'The fault, dear Brutus, is not in our stars / But in ourselves.'”

Hazel is 16 but is wise beyond her years. Diagnosed with thyroid cancer which has metastasized to her lungs, she treads lightly through life for fear of causing collateral damage.

"They might be glad to have me around, but I was the alpha and the omega of my parents' suffering." (p. 116)

Augustus is a 17-year-old cancer survivor (osteosarcoma) who, despite the loss of a leg and years of struggling through cancer treatments, demands to live a full life. He is highly intelligent with a sardonic sense of humor.

A bitter author living in the Netherlands, he drinks excessively to deal with the pain of his daughter's death from cancer. He is idolized by Hazel until his betrayal of her.

"'That novel was composed of scratches on a page, dear...what happened to them? They all ceased to exist the moment the novel ended.'" (p. 191-192)

Why John Green Wrote This Book

Green was inspired to write this book in large part because of his friendship with Esther Earl, a 16-year-old who died of thyroid cancer in 2010. He has donated heavily to a charity in Earl's name run by her parents.

He consulted with oncologists, patients, and family members when preparing for this book. He feels it's important for others to understand the realities of living with cancer, that having an illness (even terminal) does not have to define a person or limit what they can contribute to the world and to the people around them.

Hazel and Augustus live with the reality of their own mortality on a daily basis. Throughout the book, they discuss their beliefs about the afterlife and whether one must leave some "grand legacy."

Hazel grapples with how her inevitable death will affect her parents - her mother in particular. She must also pen a eulogy for her boyfriend.

Hazel and Augustus are star-crossed lovers. Hazel is exploring real intimacy for the very first time, culminating in her first sexual experience.

Both characters (but especially Hazel) are beginning to test their independence. Hazel must reevaluate her relationship with her mother, who views Hazel as fragile and is overprotective of her.

Both Hazel and Augustus feel betrayed by the return of his osteosarcoma. Hazel feels betrayed by Peter Van Houten, who will not reveal the information she seeks.

Isaac's girlfriend Monica cannot bear to see him through his life-saving surgery, nor deal with the aftermath, so she breaks up with him, leaving him angry and hurt.

Green doesn’t underestimate the young adult reader; in fact, he resents that so many writers do. He knows how smart his readers are, and how they’ve been condescended to all their lives, so he writes about intellectual and emotional experiences because he knows they’ll connect with that style of writing. He uses “big words” but knows the reader can discover their meaning either through content or via a Google search. “I'm tired of adults telling teenagers that they aren't smart, that they can't read critically, that they aren't thoughtful…” (Patrick, 2013, para. 11).

If you read any John Green book, you'll most likely cry (he often cries while writing them), you'll be intellectually challenged, and you'll have laid bare almost every human emotion by the story's end.

Here are Green's own words about how he writes:

"The reality of experience is ultimately a lot more interesting to me than what I think is sort of wrongly called "objective reality." Because I don't actually think objective reality is a thing -- certainly not a very interesting thing for fiction, I don't think" (Rosen, 2013, para. 35).

"Yeah, my interest as a writer is not in reflecting actual human speech, which, of course, does not occur in sentences and is totally undiagrammable. That's not my interest. My interest is in trying to reflect the reality of experience -- how we feel when we talk to each other, how we feel when we're engaging with questions that interest us. So, yeah, certainly, teenagers don't sound that way when they talk to us. Like, they don't sound that way *to us*. But they do sound that way to themselves. And that's what interests me. I'm trying to capture that, because I'm not really interested in capturing how they actually sound, because that's not their experience" (Rosen, 2013, paras 33-34).

"Part of the thrill of celebrating that teen intellectualism, where you're reaching keeps exceeding your grasp just a little bit, is in learning, is in getting excited about learning. So there's a lot of examples of that in The Fault in Our Stars: Hazel is wrong about infinite cardinality when she talks about infinite cardinality, when she talks about there being infinite numbers between 0 and 1, and 0 and 2, and Gus frequently misuses big words and stuff. But their intellectual enthusiasm is really appealing to me" (Rosen, 2013, para. 43).

This book would be a thoughtful choice for high school reading or a book club for young adults.

Discussion questions should guide readers into an analysis of the book's themes, as well as a deeper reading of the text in some areas and help draw connections between aspects of the story and their own lives.

I might pair this book with Before I Die by Jenny Downham, which has similar themes but a different author, so the club members can compare and contrast.

Though this book is highly regarded, there are legitimate criticisms. I found several commentaries, many by young adults, regarding their dislike of story elements. Complaints ranged from the lack of depth in the plot and the glorification of cancer to the formulaic feel of the story and the inauthenticity of the sex scene.

One criticism that is commonly shared concerns dialogue: "Modern teenagers don't speak with the vocabulary of Shakespeare nor do teenagers speak in page-long monologues that seem overly rehearsed instead of being spoken on the spot." [see video to the right]

"John Green is the #1 New York Times bestselling author of Looking for Alaska, An Abundance of Katherines, Paper Towns, and The Fault in Our Stars. He is also the coauthor, with David Levithan, of Will Grayson, Will Grayson. He was the 2006 recipient of the Michael L. Printz Award, a 2009 Edgar Award winner, and has twice been a finalist for the Los Angeles Times Book Prize. Green’s books have been published in more than 55 languages and over 24 million copies are in print. John is also an active Twitter user with more than 5 million followers."

Other Books by John Green

Social Media and the "Cult of Nerdfighters"

Green has leveraged social media effectively to build his brand. Before The Fault in Our Stars came out in 2012, preorders had already launched the book to #1 on Amazon. How did this happen?

He galvanized his enormous base and cross-promoted the book across platforms (Twitter, YouTube, etc.). He brought his fans into the cover-design process. He promised to sign all preorders. Not only did this rally his fan base and launch the book onto the bestseller list, but it also endeared his fans to him even more.

People really like John Green. Spend any time on his Tumblr or Twitter accounts, and it’s obvious that his fans, largely young adults and 20-somethings, really enjoy interacting with him. He vlogs with his brother Hank (vlogbrothers on YouTube), he’s hosted shows for Mental Floss (here’s a video listing “26 Facts About Libraries” which Green narrates) and Crash Course, and he’s started a charity (Project For Awesome). Most important, Green treats his fans like they matter, their voices and opinions matter. He’s as down-to-earth and humble as they come. He wants to listen to them. They give his some of his best writing inspiration:

“I’m very, very lucky as a writer to have so many readers in my life. Like, readers I can connect to through Twitter or Tumblr or YouTube or whatever, so I can read their comments and their posts about what interests them and what’s difficult for them, what they care about, how they care about it. That’s my biggest inspiration: that community of readers” (Katz, 2015, para. 6).

The "cult of Nerdfighters" represents the hundreds of thousands of social media followers of both Greens (Hank and John) whose life mantra is "to decrease world suck." It's viewed by some as being on a "hero's quest", but ultimately it's a chance for his their many (especially younger) fans to feel they can make a difference while connected through a common cause. As one fan puts it:

"They’re fighting to decrease world suck...basically, it comes back to why you would align yourself with any group, particularly if you are younger: It’s nice to feel like a part of something greater than yourself, particularly if in your non-internet life you don’t feel all that connected to other people" (EW Staff, 2014, para. 23).

Here are some author-related links:
Here are some links to book-inspired fan works:
Click here to read reviews: 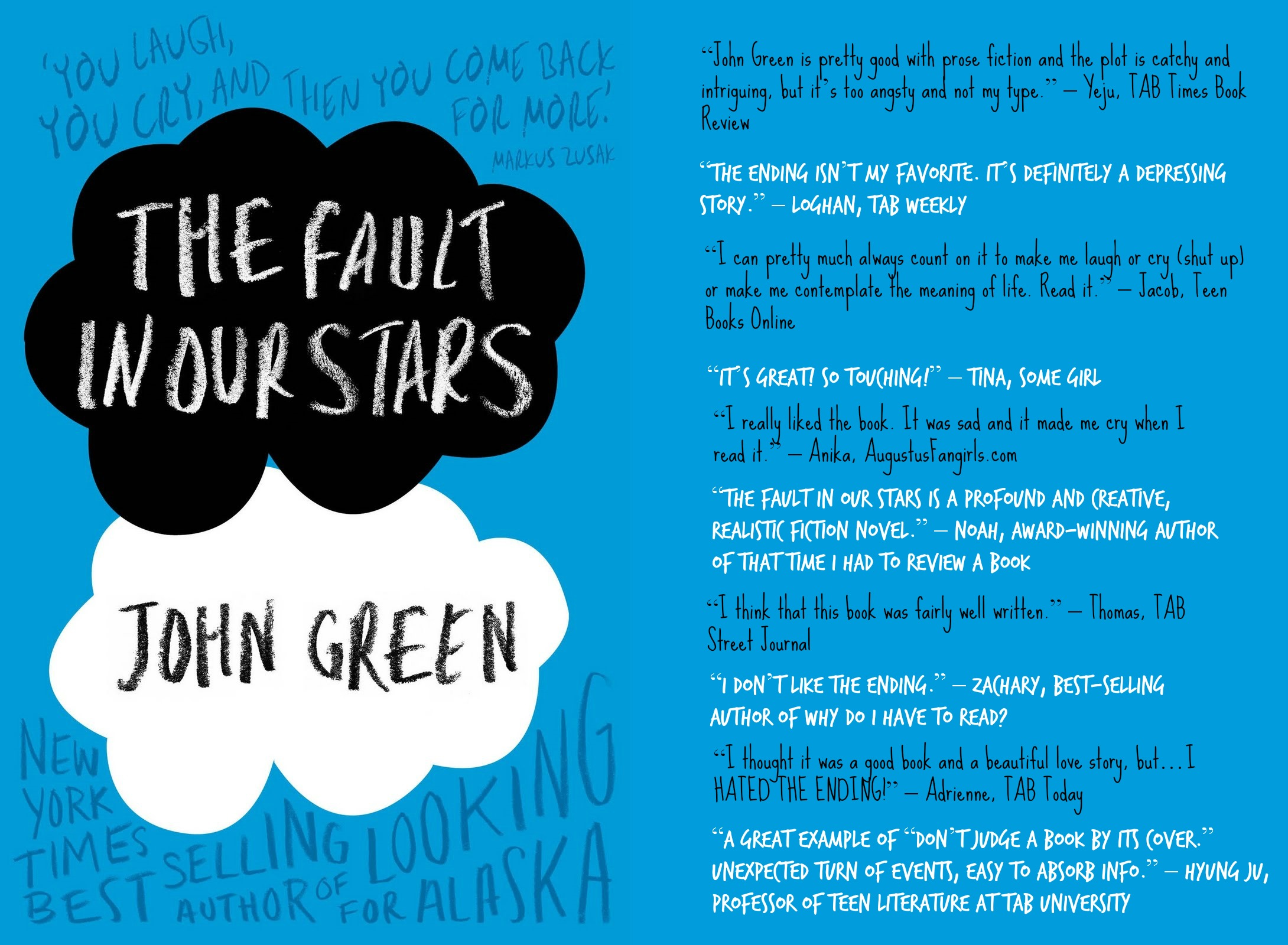